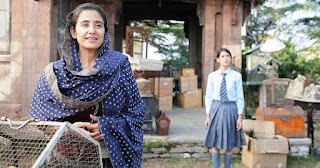 After rowing through a career spanning almost three decades and more than 80 films, usually an actor's goals tend to change and ambitions are reset.

In another era, the driven tribe of actors would invest in hours of retakes to earn name and fame and earn accolades. However, with the passage of time, it is no more about proving to the rest of the world about one’s capabilities. Instead, it is more about falling in love with the profession and exploring the best of oneself. Just that the world of Bollywood is harsh.

It doesn’t care who you were and what are your accomplishments. For female actresses, it is even more tougher to carve out a successful career in a vast colosseum, as the arena basically belongs to the young.However, there is no expiry date for art.

Manisha Koirala, one of the leading ladies of Bollywood in the 1990’s, belongs to that driven tribe of artists whose inner voice is perhaps pushing her to stretch time and range of skills. Her heart still seems to beat for the 70mm silver screen.

Since her return from winning her battle against cancer, we have seen glimpses of how the actress is exploring uncharted territories. We saw  enough evidence of it in movies like Dear Maya, Lust Stories and Sanju.

In Dear Maya, she put on a heartwarming performance, where she transforms herself from being a lonely woman living in isolation in a dusty house to taking another chance to find a new meaning in her life. As Shubhash K Jha, the noted film critic, said:  “Manisha Koirala plays the wilting flower with heartbreaking integrity. She is a feast for the senses.”

The one recent movie of Manisha that really caught my eyes was Lust Stories. The Netflix movie once again encapsulated the point that the actress has added a few more strings to her acting prowess.

In the movie, it felt as if the actress was able to blend her wisdom of experience with spontaneous acting to bring the best out of her character of Reena. It was more than just the actress wearing the swimsuit for the first time in films. It was about handling complexities of a role where the character perhaps has had enough of looking after  her emotional husband and is having an affair with her husband's friend (Sudhir).

“We managed to convey so much about the dynamics between my character and the two men in her life anyway. What I liked about my character is that she is past the age at which women in our films are allowed to have affairs. And she is more fearless about her feelings for than the two men,” Manisha was quoted as saying by the Deccan Chronicle.

In Sanju, Manisha had a brief role, but she still laid down the marker with a fine performance. In the film, even though the mother (the role played by Manisha) tries to hide her suffering from her son, one could feel the emotions and vulnerability in her deep voice.

There is no doubt that Manisha has evolved as an actress with time. She seems to have found that maturity to explore her range of skills in order to be responsive to change. If we take a jog down the memory lane to early 1990’s, here was a pretty woman who used to wow the audience with her innocent charm in films like Saudagar, First Love Letter, Dhanwan, Sanam (delayed film) and many more.

At that time it was hard to envisage in a few years time she would evolve as an actress and give bravura performances in films like 1942: A Love Story, Bombay, Akele Hum Akele Tum, Khamoshi, Agni Sakshi and Dil Se. Not all of them did well at the box office but in the mid-1990’s, Manisha seemed to be ahead of her rivals in relation to choosing scripts and also putting up strong performances.

And then came a phase where we saw her career on a downward slide. As a film afficionado, watching the horror flick Anjaane (2005), the writer could only shake his head with a tinge of sadness, as Manisha seemed to be going through the motions while essaying the role of Shivani.

While watching Chaahat Ek Nasha, Market, Tum and a few of her other films made one wonder where has that spark gone? Where is the Shaila Banu of Bombay? The Annie of Khamoshi or the Moina/Meghna of Dil Se?

It felt as if she had lost that passion for acting. It is perhaps not right on one’s part to touch upon someone’s personal life, but that also played a part in her nose-diving career. Setbacks also sow seeds of doubt in any artist. The belief erodes a little. But, wading through such a journey helps a person to grow.

Fortunately, since successfully battling through a life-threatening condition, she seems to have once again found her passion for acting.

The graceful actress comes across as someone who will cry but won’t lose hope. Maybe, on occasions, she will doubt her abilities but that won’t deter her from pushing the boundaries of her profession. She never seems to quit.

Hopefully, she would be able to explore more layers of her acting prowess in upcoming Netflix projects like Freedom and Maska.

Posted by Barry at Thursday, January 23, 2020 No comments: Links to this post